Ole Gunnar Solskjaer has said Manchester United are crying out for “quality signings”, but who should they bring in before next week’s transfer deadline? And what are the areas in need of strengthening?

United suffered their eighth Premier League defeat of the season against Burnley on Wednesday, meaning Solskjaer has now lost more games than he has won since his permanent appointment last year.

Solskjaer’s record is under scrutiny, but he has not been helped by the years of questionable recruitment since Sir Alex Ferguson’s retirement, and with time running out to bring in reinforcements this month, he and Manchester United are facing a pivotal few days.

“They need to sign players, it’s as simple as that,” says Sky Sports News’ James Cooper. “But it’s more than just signing them for the sake of it. They need to get players in who can actually improve the situation.”

Manchester United were commended for their strategy of pursuing young players during the summer, but they have failed to find a balance between youth and experience.

The squad contains only four players between the ages of 27 and 30 and that includes Phil Jones and Marcos Rojo, two individuals with little future at the club.

The average age of United’s starting line-up this season is just 25 years and 74 days old, making it the youngest in the Premier League.

There is a dearth of players at, or approaching, their peaks and it’s something that needs to be addressed in this transfer window and beyond. 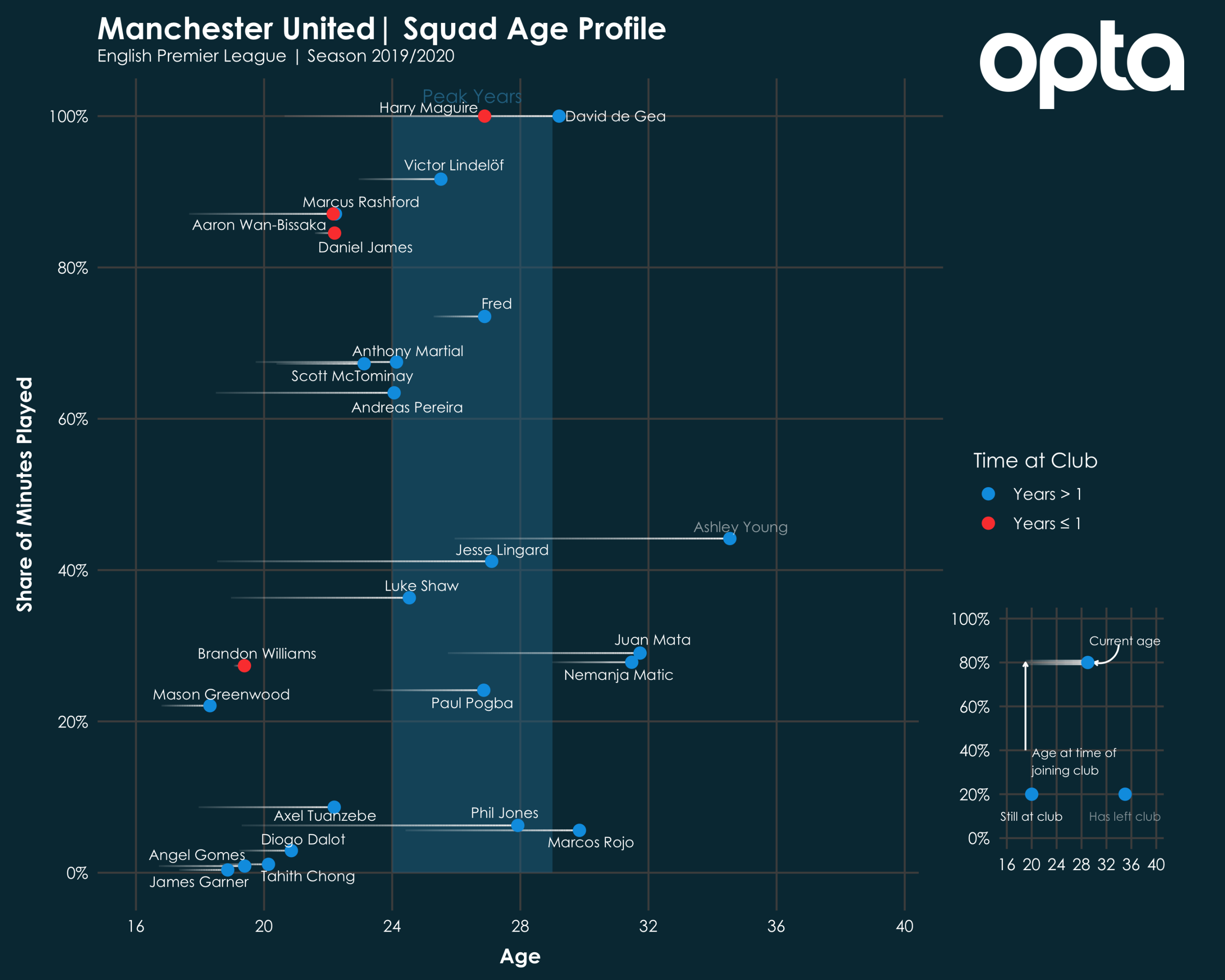 A lack of creativity is another big issue facing Manchester United. They do not have a single player in the top 20 for chances created in the Premier League this season. Against Burnley on Wednesday, Aaron Wan-Bissaka’s overlapping runs were their only source of danger.

It is why they would be wise to continue their pursuit of Bruno Fernandes. As well as being an experienced international and proven goalscorer, the 25-year-old has created more chances and provided more assists than any other player in Portugal in the last two seasons.

Other midfield targets have been linked with the club, including James Maddison, Jack Grealish and now Inter Milan’s Matias Vecino, but Fernandes’ pedigree is such that he remains the prime target.

“What we’re seeing is other midfield names being mentioned from the shortlist Manchester United are working to, but Bruno Fernandes is top of it,” says Cooper.

“There has been some suggestion that other players could be seen as plan Bs, but although there has been no progress on the deal yet, Fernandes is the only real plan.

“They need a Fernandes-style signing to change the narrative, but then you are also talking about a player who has never played in England before being lauded as the man who is going to turn things around.

“That’s a big ask for him. It’s never easy to settle at Old Trafford and Manchester United’s problems make it even more difficult. But they need a spark and he could provide it.”

Dembele could fit bill up front

The club were confident of signing Erling Haaland from Red Bull Salzburg this month, but he chose Borussia Dortmund instead, going on to score a 20-minute hat-trick on his debut for the German side.

United have considered various short-term solutions, including Edinson Cavani, Dries Mertens and Mario Mandzukic, but they are all 32 or over and United might be better off pursing Lyon’s Moussa Dembele.

“United do need experience and they know that, but the trouble with players like Cavani is that they are maybe too experienced, in terms of their age,” says Cooper.

Dembele, who turns 24 in July, has experience of playing in England and Scotland with Fulham and Celtic respectively. He has fired 36 goals in 76 appearances for Lyon since moving to the club in 2018, and figures highly on Manchester United’s long-term wishlist.

“I think there is a realisation that they can’t get someone in for the short-term because there aren’t many suitable options out there,” says Cooper.

“United are remaining tight-lipped on names because they don’t want to be seen as missing out on players they want after what happened with Haaland, which embarrassed a lot of people at the club.

“But what they might try to do, rather than look for that short-term fix, is to try and bring one of their world-class targets for the summer forward to January and that’s why we have seen them sending scouts to watch Dembele.

“What the Burnley game proved is that without Rashford, you haven’t got the players there who can take the two or three big chances that come up per game. Mason Greenwood is too young to play in every game, and Anthony Martial is not scoring enough to lead the attack.

“They need someone more ruthless who can slot in, but the difficulty is that every club in the world now knows they are desperate.

“Ole has been very noble about making sacrifices and getting rid of [Romelu] Lukaku in the summer, but in hindsight he knows he should have got another body in there. Dembele could now be that man but it won’t be easy to get him.”

Should Bellingham be a priority?

Manchester United have made a £30m offer for Birmingham prodigy Jude Bellingham, as confirmed by Sky Sports News, but for all his undoubted potential, they have other needs which are far more pressing.

“He is someone they have been looking at for an awfully long time,” says Cooper. “They have been talking to Birmingham for the last 12 months about him. They rate him very highly, but then so do a lot of other clubs.

Analysis: Why Bellingham is a special talent

“From their point of view, could they offer a 16-year-old first-team football right now? Almost certainly not.

“He might decide that he is better off staying at Birmingham for now, where he will get more game-time.

“It was suggested to me that some kind of deal with an 18-month loan back to Birmingham might be the best option, so he would come to United in the summer of 2021.