When Watford and Manchester City walked out at Vicarage Road for their Premier League match last December, they were greeted by a resplendent Rookery End rainbow.

Supporters from the Proud Hornets – the home club’s LGBT fans group – and The 1881 Movement worked together to create the eye-catching mosaic to mark the annual Rainbow Laces activation. Seen around the world, including in countries where even basic LGBT rights are yet to be won, it instantly became one of the most memorable moments in the seven-year history of the inclusion campaign.

A year on, Watford may be struggling on the field – 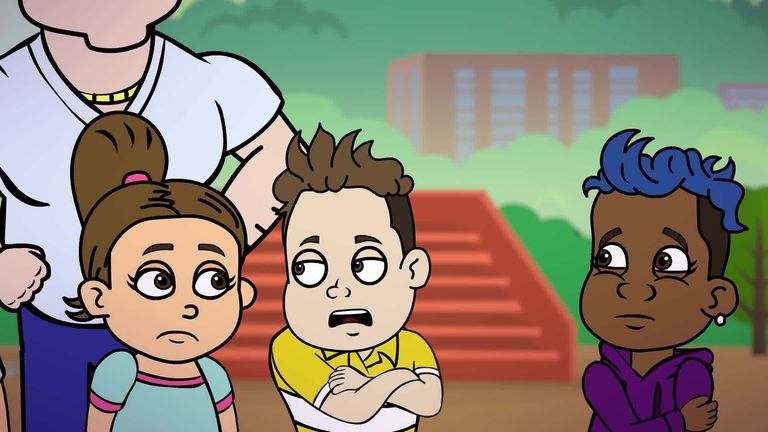 Watch the trailer for ‘Game Changer’, which is helping to tackle anti-LGBT bullying. Video via LaGolda TV

Watford legend Jay DeMerit, the former USA international centre-back whose goal against Leeds in the 2006 Championship play-off final in Cardiff helped take the Hornets into the top flight, is among those backing ‘LaGolda’ to make conversations about inclusion easier, and in turn make a difference to the lives of LGBT youth.

Talked to 22,000 @watfordfcofficial fans at halftime and the kids had a halftime penalty kick shootout with our rainbow soccer balls the day after a triumphant press screening of our @lagoldatheanimation in London. Thanks to the brilliant Watford legend @d6merit for sharing the vision. @dogoodlivewell #lagoldalgbtq #lagoldagamechanger

The animation project is the creation of Los Angeles-based George Valencia, who serves as executive producer with his wife Judy Reyes and her fellow actors Roselyn Sanchez and Eric Winter – familiar faces from a string of TV series and movies who also lend their voices to the ‘LaGolda’ characters. There is also a non-profit social arm called ‘Sound of Gol’ which encourages soccer as a vehicle for education and development.

With Sir Elton John playing such a pivotal role in Watford’s history, it has always been considered a more gay-friendly club than most. Proud Hornets was founded nearly three years ago as a way to give the club’s LGBT fans an additional sense of solidarity, community and visibility.

“I’d definitely say I feel a lot safer, and maybe more accepted since we launched,” says co-founder Callum Jewell. “Before that, I felt I had to put a little bit of an act on. Now I feel much more comfortable to be my genuine self.”

However, instances of discriminatory language and behaviour in and around stadiums are far from uncommon and continue to keep fans away from attending. Stonewall research shows four in 10 lesbian, gay, bisexual and transgender people do not think public sporting events are welcoming environments if you are LGBT.

“It makes you feel hollow… empty and disappointed,” says Jewell, when asked about the effect of hearing homophobia. He adds that such occurrences at Watford games – albeit rare – also constitute a serious lack of respect for Sir Elton and his years of commitment to the Hornets.

Next up, a relegation six-pointer at Southampton on Saturday evening. The weather forecast suggests another damp afternoon in store. Yet nowadays, even when football is at its most miserable and uninviting, it is becoming more common to find a rainbow connection that hints at better days ahead.

JD - January 10, 2020
0
Donegal have pulled out of their Dr McKenna Cup semi-final with Monaghan which was due to take place this Sunday. ...

Fallon Sherrock rewarded with spots in all 2020 World Series of...