Steve Hansen has ramped up the mind games ahead of New Zealand’s World Cup quarter-final with Ireland, pledging to lay false traps for Joe Schmidt.

Schmidt’s famed analytical approach has yielded great success in his six years as Ireland head coach, notably the nation’s maiden two victories over the All Blacks.

The former Leinster and Clermont coach devises set strike plays for each specific match, and will doubtless roll out a new trench for Saturday’s battle in Tokyo. 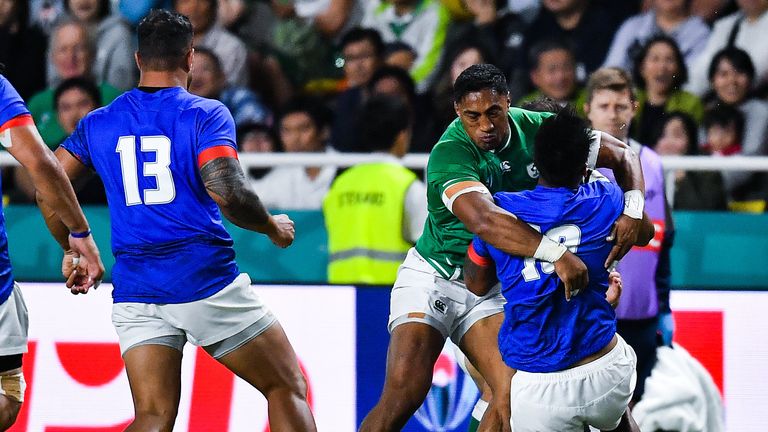 “You know that Joe does a lot of studies, so that can be a strength and a weakness. I might be able to set him up.

“The best part is we know who we’re playing; they’re a quality side, they’ve been number one this year.

“The last three results are ‘loss, win, loss’ so there won’t be any complacency in our camp. It’s pretty exciting; we’re right where we want to be.

“It’s taken Ireland a long time to get there (beat New Zealand) and obviously they enjoyed it. So they decided to keep doing it.

“I think there’s a lot of respect from both sides. We played them in November and it was a titanic struggle and on the day they were the better side.

“Most teams we play get up to 10 per cent better than they normally do and they’re no different.

“The big difference here is it’s a do or die game for both teams. Both teams are in good nick; fresh, excited and, I can only speak on behalf of ourselves, we’re really looking forward to the challenge.”

New Zealand can break yet more World Cup ground with an unprecedented third consecutive triumph in Japan, while Ireland are still shaking off their 19-12 loss to the tournament hosts.

Stellar half-back pair Conor Murray and Johnny Sexton are inching back to top form for Ireland, and Hansen admitted they can elevate Schmidt’s team to different heights.

“They’re pretty set on how they play, just like we are; they play to their strengths,” Hansen added.

“Conor Murray does a lot of kicking and they use Johnny Sexton to drive them around the park and their big forwards to carry and why would they want to change? That’s been very successful for them.

“I think they’re better than a one-man team but the 10 is pretty important.”

New Zealand’s final Pool B clash against Italy was cancelled due to the impact of Typhoon Hagibis, handing Hansen’s men two weeks to prepare for their quarter-final.

But Hansen insisted his side will not be ring rusty due to their extended break.

“Having a week off is not a bad thing, we’re quite excited by that fact,” Hansen said.

“It’s allowed us to work really hard Friday. The GPS numbers were equivalent or just above what a normal Test match would be so we don’t feel like we’ve lost any opportunity to get ourselves where we need to be.

“The exciting part is we had Saturday locked up in the hotel and had a whole day’s rest when we couldn’t do anything because of the storm.

Unai Emery, Marco Silva, Manuel Pellegrini: Who is the most vulnerable...

JD - November 24, 2019
0
They say the November international break is a dangerous time for an under-fire Premier League manager - but what if results have not improved...

Fallon Sherrock rewarded with spots in all 2020 World Series of...

Eddie Pepperell pairing with Bryson DeChambeau could be feisty in Dubai