Shawn Porter tells Sky Sports about distancing himself from the Kell Brook defeat, evaluating an Amir Khan fight, and a blockbuster battle with Errol Spence Jr.

Porter was not prepared to let his 2014 defeat to Kell Brook be the end of his top-level career. Their summer showdown on America’s west coast five years ago was considered a tight affair, but it was the Sheffield man who got the verdict as Porter’s brief reign came to an end.

Now WBC world champion, the gutsy Ohioan goes into this weekend’s unification with Errol Spence Jr aiming to become the best welterweight in the world, but any chances of him wanting to avenge the Brook setback are non-existent. 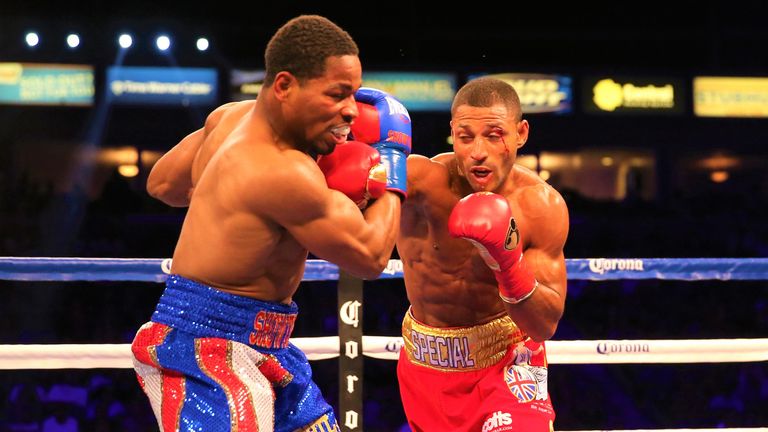 It was a fight I thought I won, and probably should’ve won, but that night belonged to Kell Brook and I had to go back and start again.

“Listen, that was a result that hurt for a little while afterwards,” revealed Porter when speaking to Sky Sports ahead of his mouthwatering clash with Spence in the early hours of Sunday morning. “It was a fight I thought I won, and probably should’ve won, but that night belonged to Kell Brook and I had to go back and start again. Would I want to fight Brook again? I don’t think so.

ðŸ—£"@ErrolSpenceJr will be broken."ðŸ‘€ @ShowtimeShawnP is supremely confident ahead of his world title unification bout this weekendðŸ“º You can watch #SpencePorter live on Sky Sports Action this Saturday night! pic.twitter.com/vv1BwEJDRy

“His career has gone off in a totally different direction to mine after he beat me, and I don’t think me beating him now and levelling things up would bring a whole lot of credit. He’s been beat by GGG and then he lost to Spence, and I don’t even think he has anything lined up at the moment.

“The fights that matter to me are the ones that will make me the best welterweight on the planet, and that starts with Errol Spence in my next fight. After that I’d like to take on Manny Pacquiao.”

As well as dismissing a potential meeting with Brook, Porter also poured water on another British opportunity as a fight with Amir Khan also carries no appeal to him. Despite operating on boxing’s biggest stages against leading names such as Danny Garcia, Saul Alvarez and Terence Crawford, Khan’s best years appear to be behind him and Porter is instead focusing on showdown that can bolster his legacy.

“Khan was a great fighter, and a fight between me and him a couple of years ago would’ve been certain to get people talking,” said Porter.

“He’s still about now and he’s doing okay for himself, but he doesn’t have anything I want at the moment.

“Boxing for me right now is about looking at the guys in my weight class who can get me motivated and want to get in the gym and give my all every single time. Errol Spence is a fighter that does that for me and that’s where I want to be at. Khan has been brilliant for boxing, but I’m at that stage in my life where I want to look forward.

On his imminent clash with Spence, Porter added, “It’s a fight for two belts. Champion against champion so what’s at stake is massive for the winner and the whole welterweight division.

Team of the Week: The best of the European domestic leagues...

Gareth Southgate says he may not be England boss at World...

Anthony Joshua’s next opponent ‘sounds like it will be’ Kubrat Pulev,...