Shell-shocked Scotland captain Stuart Hogg has apologised for the incredible “schoolboy” gaffe that cost his side dear in Dublin, as they lost 19-12 to Ireland in the Six Nations.

The full-back was looking to lead his team to victory on his first outing as Dark Blues captain, but with the Scots trailing by seven points 11 minutes into the second half, he blew a certain try with an astonishing blunder when the ball slipped out of his grasp as he attempted to dot down.

With that let-off, Ireland went on to hand new coach Andy Farrell a maiden 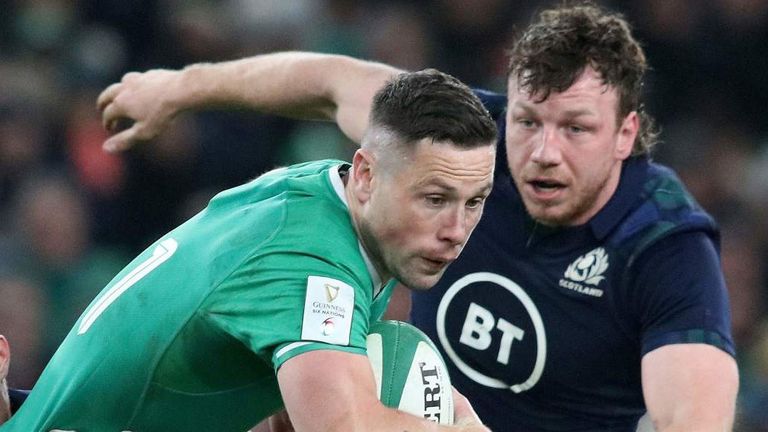 Expectation levels among the Scottish faithful have rarely been lower after a disastrous 2019, which ended with a first-round World Cup exit.

The fact they crossed the Irish Sea without talisman Finn Russell after off-field issues only lowered expectations, yet Gregor Townsend’s team fronted up in a way they failed to do when taking on Ireland in Japan last year and should have punished Farrell’s side more than once.

Indeed, despite furrowing to within five yards of the Irish line on six occasions, they failed to cross the whitewash.

Hogg said: “I’m incredibly proud of the boys. We came across here with a huge task on our hands and we fronted up.

“Our defence stood firm, something we’ve worked on incredibly hard over the last couple of weeks.

“I’m proud of their efforts. We’re bitterly disappointed not to have come away with a result. We feel we’re in a good place and it’s now about kicking on and learning from today come next Saturday.

“We talk a lot about our conversion rate in attack and making sure when we get into the 22 we’re coming away with points.

“Unfortunately we came up short there.”

Farrell was delighted to get his reign off to a winning start, saying: “I thought we thoroughly deserved the win, although I thought Scotland were great.

“It was a good Test match. First up, it was very attritional, I thought that Scotland’s forwards were excellent.

JD - December 19, 2019
0
With Takumi Minamino signing for Liverpool, what will the Japan international bring to Anfield? Minamino impressed against...

Who can be England’s Matt Prior as they battle to save...

England Test hopeful Dom Sibley says he is not a ‘blocker’

Jadon Sancho linked with £120m Chelsea transfer – but is he...