San Francisco overcame five turnovers to maintain their perfect start to the season with a 24-20 win over the winless Pittsburgh Steelers.

An error-strewn contest in Santa Clara turned in the final moments as the teams traded turnovers before Jimmy Garoppolo’s five-yard touchdown pass to Dante Pettis with 75 seconds left.

That score came seven plays after San Francisco’s DeForest Buckner recovered Pittsburgh’s James Conner’s fumble at the Steelers’ 24-yard line just moments after Pittsburgh appeared to have stopped the 49ers and forced a field-goal attempt, that was flagged for defensive holding at the two-minute warning.

Two plays later, Garoppolo threw the game-winner, enabling him to offset a hit-and-miss afternoon’s work for the 49ers who gave the ball away four times in the first half and then lost a fumble again in the fourth quarter as they racked up 71 yards of penalties to go with their turnovers.

Garoppolo mixed good with bad as he completed 23 of 32 passes for 277 yards with two interceptions and his solitary touchdown pass which sealed the victory and spoiled Mason Rudolph’s first career start in place of the injured Ben Roethlisberger.

Rudolph completed 14 of 27 passes for 174 yards and two touchdowns, including a 39-yarder to rookie Diontae Johnson with just over 10 minutes left that gave the Steelers a 20-17 edge.

But despite an impressive showing on defense, Pittsburgh were outgained 436-239 on the day as they were unable to turn turnovers into points, particularly in the first half where the Steelers forged a 6-3 advantage in a half of three field goals 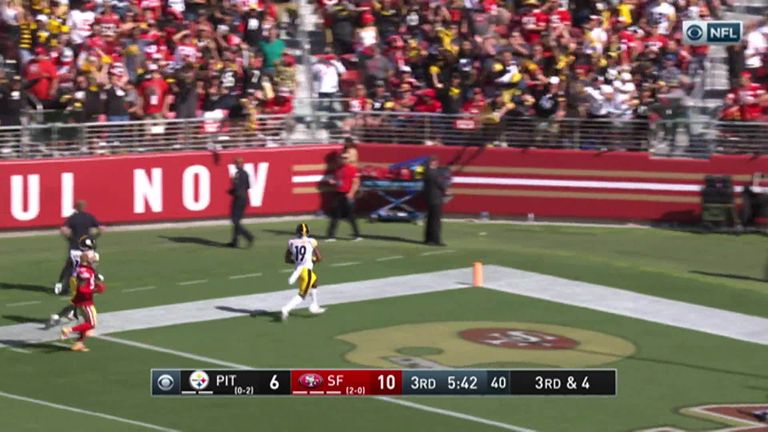 Rudolph hit back, finding JuJu Smith-Schuster for a 76-yard catch-and-run just a few moments later but the 49ers ended the third quarter in the ascendancy when Wilson ran in from 4-yards for a 17-13 lead.

A touchdown each in the final quarter ensured San Francisco left with the victory but fittingly a pair of mistakes ensured it was a dramatic finish.

San Francisco – The 49ers head into an early bye week with a perfect record and return in Week Five against Cleveland at Levi’s Stadium.

JD - November 7, 2019
0
Tyrone McKenna has declared himself as the 'King' ahead of the Golden Contract and insists he cannot be dethroned by any super-lightweight rivals. ...

The Hundred: Chris Woakes keen to play with David Warner and...

Premier League goals and highlights: How to watch with Sky Sports