Liverpool moved 16 points clear at the top of the Premier League following their 1-0 victory at Tottenham and Gary Neville can’t see anyone stopping Jurgen Klopp’s side as they go in search of a first league title in 30 years.

Liverpool’s march towards the Premier League title continued as Roberto Firmino scored the only goal of the game at the Tottenham Hotspur Stadium to secure their 20th win of the season.

The Reds, who have now gone 38 games without defeat in the league, have also taken their points tally to 61 from 21 matches, which represents the best start to a campaign of any team in the history of Europe’s top five leagues.

Neville thinks Liverpool’s lead at the top of the league is unassailable as they hunt their first Premier League trophy.

“It’s a huge win, although they were a little sloppy in the second half,” Neville told Sky Sports.

“They are outstanding, brilliant to watch and doing everything a championship-winning team should be doing. I can’t see anyone stopping them.

“The records for Klopp are incidental right now. The only thing that matters is lifting the Premier League trophy.

“I think the lead is unassailable,” he added. “Klopp will never say it but his team are playing so well and are so in control and they are still growing and getting better.

“He won’t care if he loses one or two games, he just wants that trophy. When we were asking Pep last year about records, because City have won it before they probably could look to beat their previous title victories but for Liverpool it’s all about getting that first Premier League title.”

‘Liverpool best team in the world’

Former Liverpool defender Jamie Carragher was equally effusive in his praise for Klopp’s side, saying they are the best team in the world at the moment.

“They look so comfortable in games, with a 1-0 lead they back themselves,” Carragher said on Sky Sports following the victory at Spurs.

“When Klopp came in it was end-to-end and exciting, they were an exciting team to watch, but now they are the best team to watch. They always do enough in games and in the big games they are at their best, although maybe not today.

“We knew he was a top manager but I didn’t think this development of the team over several years was possible. To get to this stage they are the best team in the world.”

‘Liverpool making superstars, not buying them’

Carragher also thinks Klopp deserves credit for Liverpool’s rise, saying the German’s work as a coach is a key element in the club’s success.

“It’s not that Liverpool are just buying players with this special ability that nobody else sees these players,” he added.

“Robertson came from Hull, Wijnaldum was relegated with Newcastle, Salah had been at Chelsea, Mane had been in the Premier League…they are not just going to the best clubs in the world and buying the best players.

“It’s okay buying players but it’s what you do with them. Sometimes we forget that. Once you have that player you have to improve them, and Jurgen Klopp probably doesn’t get enough credit for that, the work he does as a coach.

“Liverpool are not buying superstars, they are making them.”

Liverpool have won 61 points in the Premier League in 2019-20 – the most any side has ever registered after 21 games in a single season across Europe’s big five leagues (assuming 3pts/win).Liverpool have accrued 104 points across their last 38 Premier League matches (W33 D5 L0); this is a record total by any team across a 38-match spell in the competition’s history, overtaking 102-point stretches by Man City (ending in 2018) and Chelsea (2005).This is Liverpool’s joint-best scoring run from the start of a season in English top-flight history, with the Reds also scoring in their opening 21 games in 1933-34.Liverpool have now gone 38 Premier League games without defeat (W33 D5); since their last league loss at Man City in January 2019, Tottenham have lost 16 Premier League matches by comparison, including three to the Reds.Liverpool have kept six consecutive clean sheets in the Premier League for the first time since December 2006 (seven).

Despite his side sending yet more records tumbling at Tottenham as they moved another step closer to the Premier League title, Klopp insisted there is still a long season ahead.

He said: “When somebody told me [about the records] I didn’t feel anything to be honest.

“I’ve been in football 50 years and if somebody told me that would ever happen I would say it wasn’t possible. Now it’s happened and I don’t know exactly what’s wrong with me.

“But it’s cool, it’s exceptional. If that winning streak was easy then many other teams would have done it. But we didn’t think about it before the game and someone had to remind me afterwards.

“Today was difficult, we made it difficult because we didn’t finish them off.” 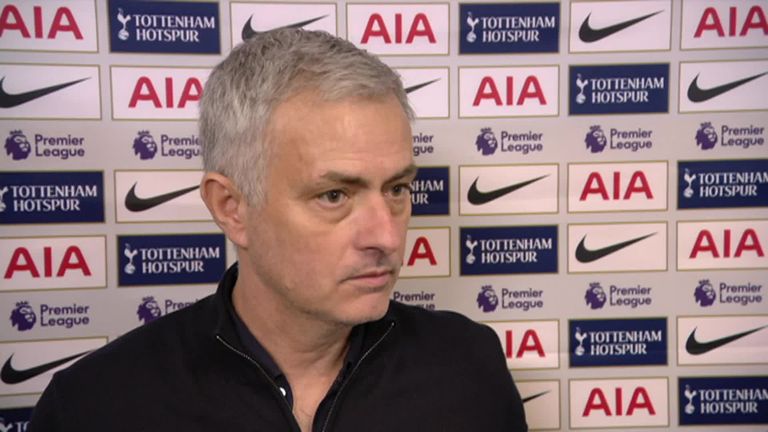 Meanwhile, Spurs head coach Jose Mourinho insisted his side deserved more from the defeat to Liverpool.

“I think we deserved a point,” said boss Jose Mourinho. “That’s why I have a good feeling from the boys.

“We’re talking about one of the best teams in the world at the maximum of their potential. We are a team with the difficulties you know. I think we deserved more.

20 – Tottenham have conceded 20 goals in their 13 games under Jose Mourinho in all competitions, the quickest any of his sides have shipped 20 goals. Indeed, in his first stint in England with Chelsea, it took 44 games for Mourinho's Blues to concede that many. Leaky. #TOTLIV

“Yesterday we spent half an hour defending throw-ins and we lost the game on the throw-in. We have to try to create a buzz to compete with a team as good as they are. I think we deserved more. We intensified the pressure more in the second half. We were more aggressive.

“I told you they would win the league when they beat Manchester City three or four months ago. They were lucky – they could have conceded a goal and got a red card for Robertson’s challenge.”

Reds full-back Andy Robertson was perhaps fortunate to stay on the pitch after catching Spurs debutant Japhet Tanganga with a high tackle. And Mourinho was quick to point out it was a far worse offence than the one which saw Son sent off against Chelsea recently.

Zlatan Ibrahimovic to AC Milan: Does Swedish striker still have ability to revive Serie A club?