Manchester United are at risk of being overtaken by Manchester City and Liverpool in Deloitte’s Football Money League, according to the latest rankings.

Their closest Premier League rivals are City and Liverpool in sixth and seventh respectively, with City just £88.9m behind.

Tottenham, meanwhile, are now the top-ranked London club in eighth – their highest ever position in the rankings, with Chelsea and Arsenal in ninth and 11th respectively.

Manchester United have been the highest-ranked English club since Deloitte first compiled the Money League survey based on the 1996-97 financial results.

However, they are forecast reduced revenues of between £560-580m for 2019-20 with the prospect of a second consecutive season without Champions League broadcast revenue.

Dan Jones, partner in the Sports Business Group at Deloitte, believes a changing of the guard is possible.

“Manchester United have been the top English club since we started the Money League but that could come under a bit of pressure when we do it in 2021,” he said. 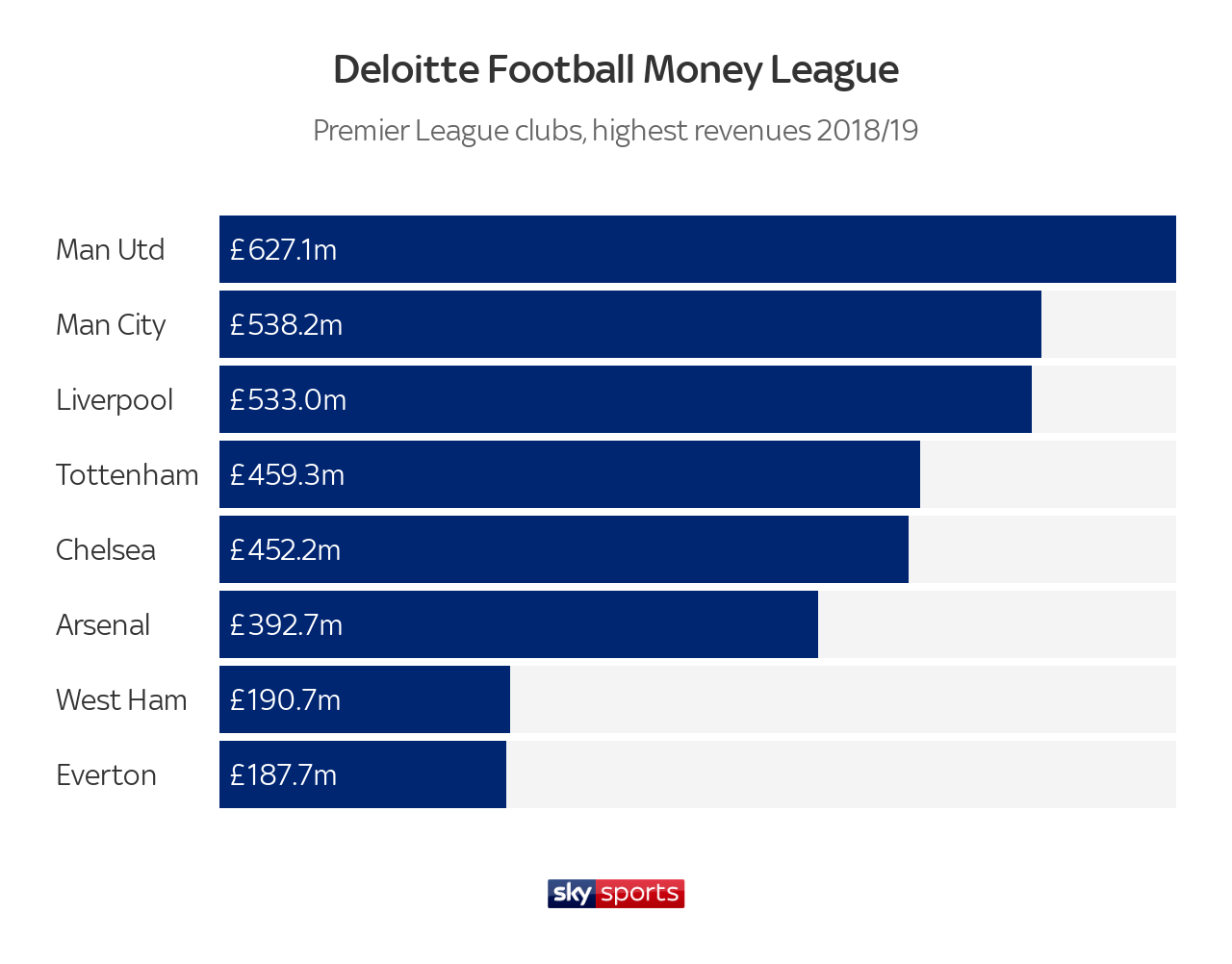 “That will cover this season when Liverpool are having a tremendous season on the pitch, so we think there’s a possibility of United losing that number one position.

“Part of that will ride on how the rest of this season goes, if City or Liverpool go deep into the Champions League.

“It is definitely a possibility that United will lose that place. Depending on where they are in that range of projected revenue (£560-580m), and if City and Liverpool do well in the Champions League, it could be very, very close.

“If you think about where we were 10 years ago, the idea that City would overhaul United in financial terms would have seemed far-fetched.”

Manchester United manager Ole Gunnar Solskjaer believes they can retain the power to compete with the best in the transfer market amid warnings their status as England’s richest club is “at risk”.

Solskjaer said: “The most important thing for me is we get the results sorted and the performances on the pitch.

“But I know that we’ve got the resources, we’ve got the backing. If we need to go into the transfer market we are still up there so we’re still in a good place.” 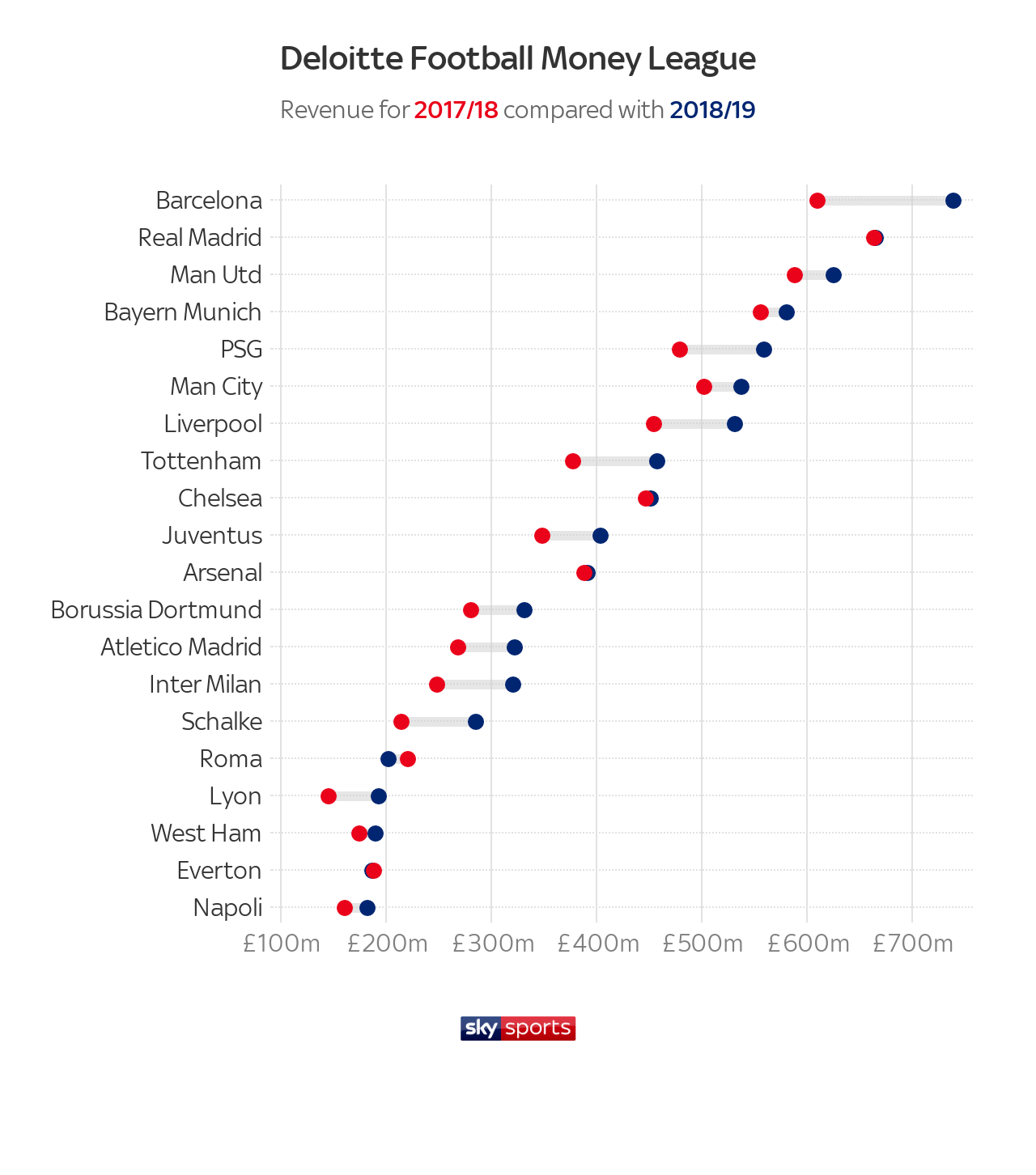 In all, there are eight Premier League clubs in the Money League top 20, more than any other country, and all the clubs hail from Europe’s big five leagues of England, France, Germany, Italy and Spain.

Tottenham have moved up from tenth to eighth in the rankings with revenue of £459.3m, while their north London rivals Arsenal have fallen from ninth to 11th after a second consecutive season without Champions League football.

Chelsea, who announced an after-tax loss of £96m for 2018-19 on New Year’s Eve, have dropped one position to ninth in the table, while the other Premier League representatives are West Ham and Everton in 18th and 19th respectively.

Combined revenues among the top 20 have grown by 11 per cent compared to last year to a record of 9.3 billion euros (just under £7.9billion).

Bigger than the club?

The Portuguese also has almost six times as many Instagram followers than his club Juventus, while the Deloitte Money League report also revealed three out of four of the world’s 25 richest clubs have less followers on the social media platform than their leading player.

Asked how much of a factor social media profile is when clubs decide to sign a player, social media expert Will Pitt said: “I think it is a very significant factor because audience numbers drive revenue – it is as simple as that.

“And if you include social media output in your potential to generate revenue as a business then it becomes very, very significant.

“But you would group that in the same way you group shirt sales and other ways to monetise but one of the issues here is ownership of content and control of that content is key.”

Barcelona lead bitter rivals Real by £73.6m, a record gap between first and second in the history of the Deloitte study.

Deloitte said a “primary factor” behind the Catalan club’s earning power was their decision to bring merchandising and licensing activities in-house.

Jones added: “Barca are a clear example of a club adapting to changing market conditions, reducing the reliance on broadcast revenue and focusing on growing revenues within its control.

Who registered for The Hundred Draft and in which price category?