There have been some bad moments during Manchester United’s dismal decline since Sir Alex Ferguson’s departure. Against such stiff competition, perhaps a 2-0 defeat at West Ham does not stand out as a particularly low point. But there was something about it – so routine, so predictable – that will leave supporters bereft nevertheless.

West Ham were good. But not that good. They didn’t need to be. Even a middling performance from Manuel Pellegrini’s men was enough to see off this Manchester United. By the end, it was Ole football, every pass greeted by a roar from the home support. But for the visiting fans, it is Ole’s football that will have been troubling them on the journey home.

Ole Gunnar Solskjaer’s side could have moved to third in the Premier League table with a win – behind only Liverpool and Manchester City. But even the Manchester United manager knows that the gulf between the top two and what his team are producing is vast. What this insipid defeat hammered home is that United are probably not even the best of the rest.

The defence doesn’t get a pass. They were too passive, too slow to close down West Ham in the build-up to the opener. It happened in slow motion inside the penalty box as Andriy Yarmolenko eluded Harry Maguire with his first touch and David de Gea with his second. Aaron Cresswell’s free-kick was brilliant but did Ashley Young really need to foul Mark Noble?

The hope was that cohesion was coming after a clean sheet at home to Leicester but it is a very different story away from Old Trafford. After winning his first nine away games in charge, Solskjaer has now failed to win any of the subsequent nine. His team have not managed a clean sheet in any of their last 11 away games – the club’s worst run in 17 years.

Even so, it is with the ball that United’s limitations are most apparent. The failure to find the net at the London Stadium means they have still scored only eight goals in the Premier League this season. Manchester City managed that in an afternoon. Those numbers actually feel like a fair reflection of the contrast between the coordination of their attacking play. 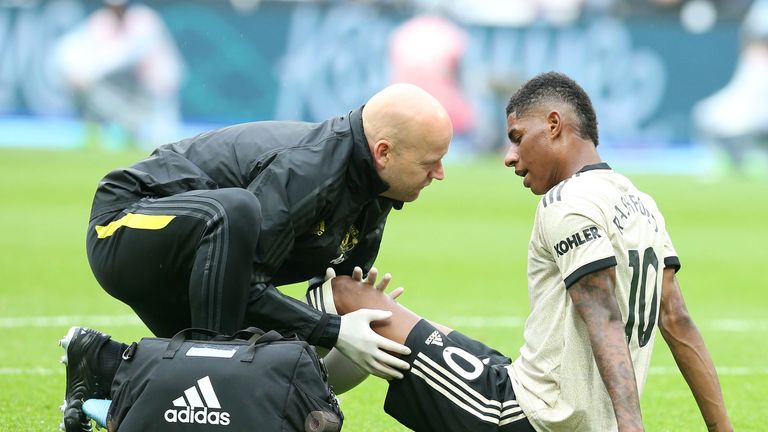 James, one of the brighter performers once more, is one of only three men to score for United in the Premier League so far but Solskjaer could now be without the other two after Rashford was withdrawn with a groin problem, joining Anthony Martial on the injury list. By the end, United’s forward line included Angel Gomes and Jesse Lingard. The squad looks well short.

Solskjaer was insistent afterwards that the right decision had been made in letting Alexis Sanchez leave, but how they could do with Romelu Lukaku now. Instead, they are waiting to find out if Mason Greenwood will be fit to face Arsenal. It has come to something when they are hoping a 17-year-old boy with two starts to his name can come to the rescue.

So what is the problem?

“Desire is not the problem it’s the quality of the decision-making and execution,” said Solskjaer afterwards. Few would disagree. The sight of his young team so crestfallen at the end – James commiserating with supporters, Andreas Pereira bent double in exhaustion – was enough to draw applause even in defeat from the travelling fans who had stayed.

But are these youngsters getting the help that they need to achieve what they need to achieve? Are they doing the work on the training ground that is going to help them find the solutions? “This group, they want to do what we are trying to do. We are working in training,” Solskjaer insisted. On this evidence, there is much left to do. But is he the man to do it?

Get a Sky Sports Day Pass for one-off payment of £9.99

When the pace of his team’s play was questioned in the press conference, Solskjaer attempted to downplay the issue by pointing out that it made no sense to question United’s pace with Rashford and James around. But there is more to it than that, as he surely knows. Moving the ball quickly, playing with purpose and a real tempo, is another matter entirely.

There was no intricacy to United’s play in the final third, none of the subtle interchanges that are the hallmarks of a top-class team. No signs at all of the sophisticated movements and patterns of play that hint at ideas being put into practice on the pitch. Instead, there were only balls to chase. Often, those balls to the forwards did not even come.

Even Paul Pogba could not be blamed this time. In fact, he was badly missed. Scott McTominay was left to provide the drive and creativity from deep. It never looked like being enough, particularly given the struggles of his senior partner alongside him. Nemanja Matic looks a shadow of his former self, his lethargy setting the wrong sort of tone for this team.

That is another problem facing United now. Sanchez and Lukaku might not have been the senior figures that were needed but little has been left behind. There are players such as Matic, Young and Juan Mata, whose best days are behind them. Beyond that, with a couple of notable exceptions, there are only young players and those who are not good enough.

Solskjaer’s comment before the game that Maguire was a candidate for the captaincy was meant as a compliment but it is indicative of the situation in which United find themselves. That a player who has arrived from Leicester for a big fee, with plenty left to prove, could yet be fast-tracked into such a role reveals the leadership vacuum into which he has arrived.