Jose Mourinho has criticised Inter Milan for their pursuit of Tottenham midfielder Christian Eriksen after he was left out of the FA Cup fourth round tie with Southampton.

Eriksen travelled with his team-mates to St Mary’s but his omission from Mourinho’s squad indicates he may have played his last game for the club against Norwich in midweek. 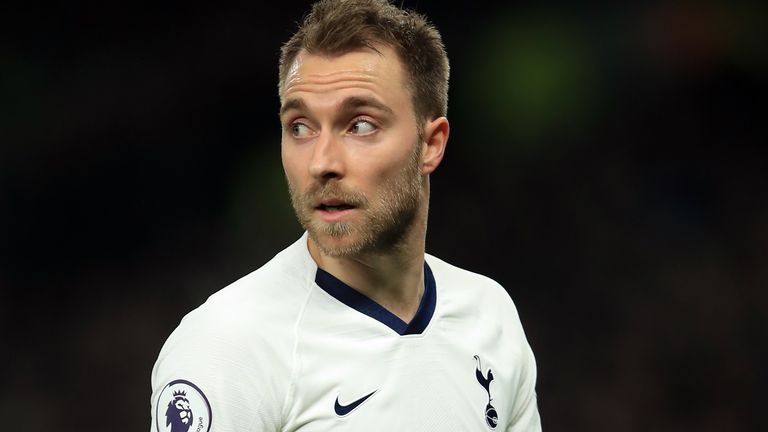 Analysis: Daniel Levy gets his way

Sky Sports News reporter Kaveh Solhekol told The Transfer Show: “Daniel Levy looks like he is going to get what he wants yet again.

“Spurs’ position from the beginning was that they were not going to accept less than €20m for Christian Eriksen even though he’s only got six months left on his contract.

“Our information is that the deal hasn’t been done yet, but our colleagues at Sky Italy believe it is almost agreed. They say it is going to be a €20m deal and that Christian Eriksen is going to treble his wages.

Mourinho said Spurs will “execute the option” to sign Giovani Lo Celso on a permanent basis, with the Argentine’s recent performances making it an “easy” decision.

Spurs have the option to buy Lo Celso for £27m this month, or £34m in the summer. That option will only become an obligation if the club qualifies for the Champions League.

“It’s not an obligation, it’s an option. I think the boy is earning the decision. He’s making an easy decision for the club to execute the option,” Mourinho said of Lo Celso, who joined on a season-long loan from Real Betis.

“[He has shown an] incredible evolution since I arrived, he had barely played a game, I think only against Red Star Belgrade. With me it was a little bit difficult in the first couple of weeks, but he understood what we wanted.

“Good learner, good kid and I think by himself he made the decision that the club is going to execute the option. That’s normal, he earned it.”