Having a punt this weekend on the football? What betting opportunities are out there? If anyone knows, Jones Knows.

A common question on Google is: how to increase serotonin in the human brain without drugs?

This chemical – responsible for increasing mood and happiness – is one that has been pumping around my body this week. No need to head for Ibiza for a week of carnage, just back some winners. It’s a real serotonin-fest.

Jones Knows got moving in the right direction last weekend with Crystal Palace vs Wolves going card crazy and the double copping a return thanks to impressive Hull doing the job at Luton. As I’ve found in seasons past, the early rounds of fixtures usually are tough to negotiate in terms of reliable results, so with teams now settling down into consistent form patterns there should be plenty of opportunities to get those serotonin levels through the roof over the next two months. I’ve got three bets to attack this week.

Remember, whatever I tip, I back. We’re in this together, comrades. Do check out the Profit & Loss record for full clarity on the results. Current returns are: -11 pts.

Dim the lights, it’s time to see if Jones Knows…

Another member of the Jones clan that could do with an increase in serotonin levels is Nathan at Stoke City. Like me, he’s been under significant pressure to deliver results without success but things are about to turn.

Stop giggling at the back. This bet has the potential to make me look a fool, but bear with me.

Stoke City are in a bit of a mess, it’s true, while Nottingham Forest are on an unbeaten nine-match run that has got the locals all giddy.

However, let’s not get carried away with results. Stoke’s performance levels have merited much more than just two points from eight games while Forest have come out on the right side of tight games despite offering up lots of chances to their opposition. I’m expecting that variance to even out over the next few weeks, starting in front of the Sky Sports cameras on Friday.

As you can see from the table below which analyses shots on target data in the Sky Bet Championship (shots on target – shots on target conceded), Forest’s numbers are more akin to relegation form than to a team currently sitting in the mix for the play-offs. 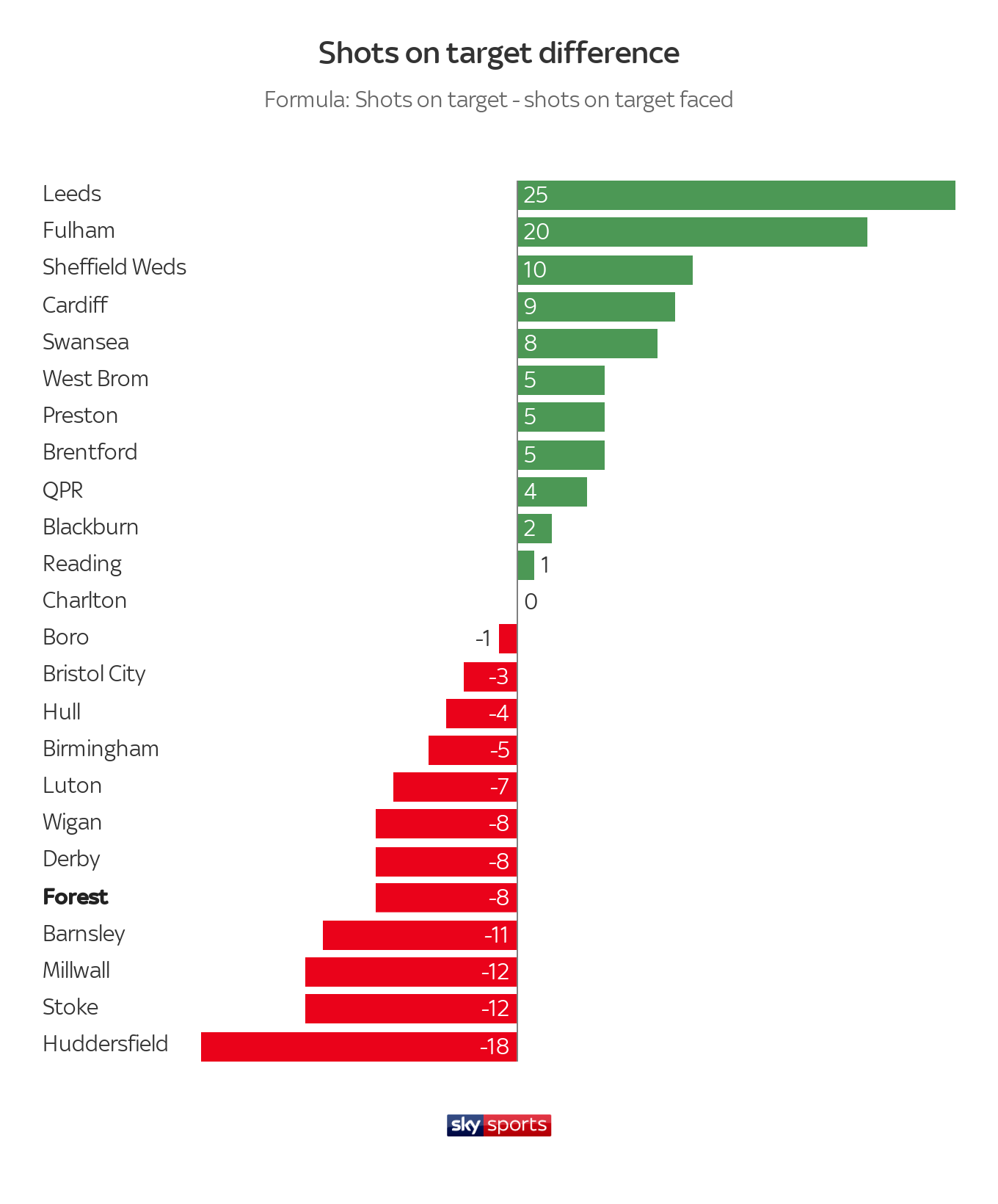 The eyes back up the numbers. In their 1-0 win over Barnsley last weekend, Sabri Lamouchi’s men were holding on for grim life for the win with goalkeeper Brice Samba making five important saves. And they were royally thumped by Arsenal in the week.

Stoke City are in the Championship relegation zone and still looking for their first win. Adam Bate examines the club’s ongoing problems.

Meanwhile, Stoke – slowly but surely – are moving in the right direction under Jones, whose job is reportedly on the line in this fixture.

I’d be a backer that come the end of October, a corner will have been fully turned. A first win doesn’t look far away judging on their first-half showing against Bristol City, where Joe Allen’s first-half red card cost them dear, and their resolute display to hold Brentford to a 0-0 last weekend.

A home win looks on the cards and the way Nottingham Forest set up under Lamouchi makes the Stoke clean sheet a definite runner, too, hence the thinking behind taking the 11/4 for a win to nil rather than 5/4 for a Stoke win.

The French manager’s approach is a very pragmatic one that has seen just 17 goals scored in their eight league matches. A gritty, hard-fought and ugly win is predicted with Stoke’s threat from set-pieces likely to stand them in good stead. Despite their lowly league position, only two teams have fashioned more chances from set plays this season than Jones’ boys and they scored via that method in their Carabao Cup exit to Crawley in midweek.

That could be their route to a long-overdue first win of the season. Any type of win will do for Jones.

Back the 3/1 Jones Knows double!

A Sheffield Wednesday win and goals at Swansea

It’s been an eye-opening first 100 days in the Middlesbrough job for Jonathan Woodgate. A pre-season full of big talk and a change of football philosophy from the Tony Pulis era has yet to materialise. Boro’s squad looks short on quality as the club has had to cut its cloth following an inability to bounce straight back up helped funded by Premier League parachute payments. Woodgate’s men were soundly beaten at Cardiff last weekend, failing to register a shot on target. Hopes of a top-six push with this squad and this manager look very unlikely, based on that performance.

Former boss Garry Monk returns to the Riverside this weekend with Sheffield Wednesday after a messy break up with Boro that still has legal battles going on.

Along with being fuelled by a desire to put one over his former employees, Monk will rock up with a capable squad that were good value for their late salvo against highly-rated Fulham last weekend despite having just 29 per cent of the ball.

Wednesday recorded five shots on target despite their lowly possession count – the most Fulham have allowed an opposition in any of their Sky Bet Championship games this season. That level of performance from Wednesday bodes well for their trip to face pretty limited opposition this weekend. I’m expecting an away win, but will play the safety net of the draw no bet market meaning the bet will be void if it ends a draw.

Double Monk’s men up with both teams to score when Reading travel to Swansea. Sky Bet have boosted to double from 23/10 to 3/1 so please punish their generosity.

The Royals play with an attacking mentality where players are given licence to get forward – they’ve created 78 chances from open play this season, only Leeds, West Brom and QPR have created more. This philosophy of being brave on the counter-attack should result in an open affair against possession-focused Swansea, who are a force when teams come at them as seen when dispatching Leeds and QPR earlier this season. I’m expecting an open game, full of space, goalscoring chances and goalkeepers beaten at both ends.

Sexy, but flimsy through the middle. That’s the best way to describe Norwich City’s opening show in the Premier League.

Defensively, the Canaries are oh so vulnerable, especially at the heart of their defence. Opposition centre-forwards are finding opportunities easy to come by. In their last four Premier League fixtures, Norwich, who are the walking wounded with four first-team defensive options on the sidelines, have allowed Tammy Abraham, Sergio Aguero, Sebastien Haller and Chris Wood to score.

Does Mauricio Pochettino have heart and energy to complete a Tottenham rebuild?

Should England have walked off after racist abuse in Bulgaria?

Portugal Masters: Brandon Stone two clear ahead of final round