Joe Schmidt says the uncertainty around Super Typhoon Hagibis has created a “distraction” ahead of Ireland’s crucial World Cup game with Samoa.

Ireland’s final Pool A match in Fukuoka will go ahead but Scotland’s game with Japan remains under threat.

Should that game be cancelled, Ireland will only be able to finish second in the pool, which would mean a quarter-final against back-to-back world champions New Zealand.

“There is a distraction; there was a lot of talk among the players post-training today when we found out about the cancellations,” said Ireland head coach Schmidt on Thursday.

“Because any time there’s something up in the air or something is unknown – especially when two games have already been abandoned – players are going to talk about that because it’s newsworthy and influential once games are being cancelled. 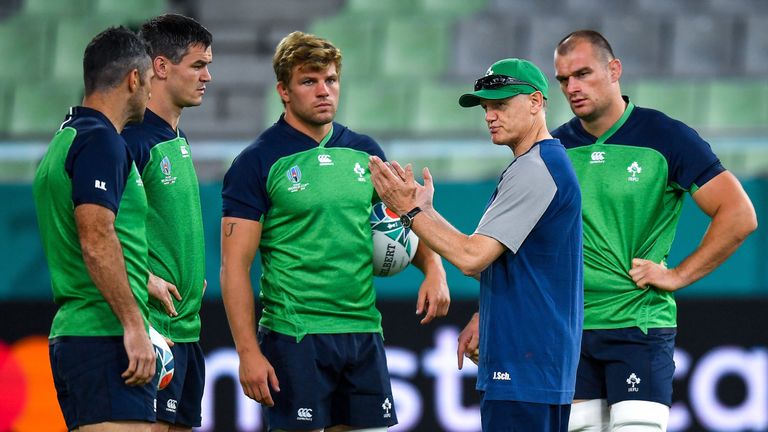 We can’t control what happens with the Japan-Scotland game, so on Saturday it’s up to us to get our business done as best we can.

“But we’ve just got to make sure our game gets finished with the right result for us, and I’m sure Samoa are going to go out to make that as difficult for us as possible.

“We’re not really having too many conversations with World Rugby; we had a few earlier in the week because at one stage the typhoon pattern was somewhat different from what it is now.

“But for us we just have to be business as usual. We can’t control what happens with the Japan-Scotland game, so on Saturday it’s up to us to get our business done as best we can.”

Fit-again Robbie Henshaw will partner Bundee Aki in the centres against Samoa, with Jordan Larmour slotting in at full-back and Tadhg Beirne at blindside flanker.

Rob Kearney was deemed not quite ready having missed a section of training on Tuesday, while Peter O’Mahony is handed a rest with a seat on the bench.

Scotland’s match with Japan will be played on Sunday in Yokohama or not at all. A cancellation would see the result inked in as a scoreless draw, and both teams awarded two points.

That would leave Ireland unable to leapfrog Japan at the top of the pool.

Schmidt’s men would be able to match Japan’s points tally, but would fall behind the Brave Blossoms owing to the hosts’ 19-12 victory over Ireland.

Schmidt refused to be drawn on whether or not cancellations damage the World Cup’s integrity, saying: “Again it’s not something I can control, I only know what we need to do, and we need to get out and get a result.

“It’s a situation nobody wanted to have. I know there are several teams who are massively disappointed their games have already been abandoned.

“With the amount of people travelling to games there are supporters and certainly players disappointed.

JD - December 1, 2019
0
Max Verstappen has shot into pole contention for the final qualifying of F1 2019 after topping Practice Three at the Abu Dhabi GP, ...

All the World Darts Championship nine-darters from Alexandra Palace

England’s most unforgettable moments of a stunning summer of cricket