England believe they can chase what would be a record pursuit of 359 to keep the Ashes series alive, says batsman Joe Denly.

Australia set the hosts a stiff target of on day three of the third Ashes Test at Headingley before a 126-run partnership between Joe Root and Denly helped England to 156-3 at stumps.

Root was there at the close on 75 not out, alongside Ben Stokes, who scored two off 50 balls to set up a gripping fourth day’s play. 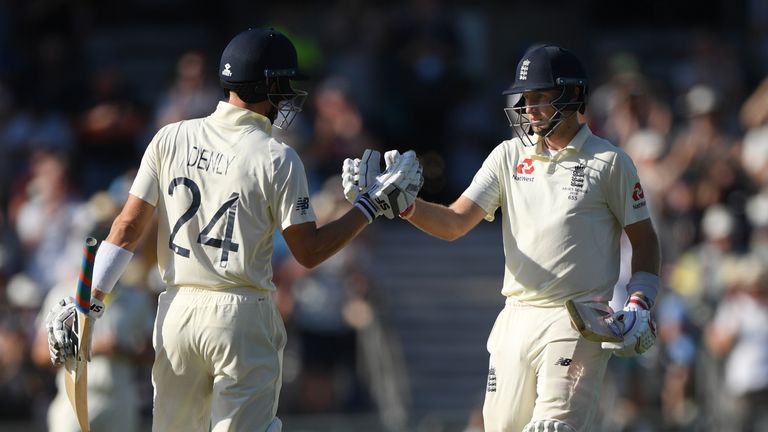 Highlights from day three at Headingley as England dug in to try and save the third Test and the Ashes.

“It would have been nice to end the day with Rooty but in saying that, I still think we’re in very good position, there’s a lot of belief in that dressing room and a lot of excitement about tomorrow,” he said.

“We went into today, never thinking about a draw or losing, only about winning – that belief has to be there. At the end of the day we’re in a reasonable position.

“We’re not getting too far ahead of ourselves. We understand there is a tricky period in the morning with new ball coming up.

“But we have Rooty and Stokesy – two world-class batters in – so get through that and we will be in a great position. With the team we have, we can win games from any position, I believe.”

Australia only need seven wickets to move into an unassailable 2-0 series lead although their prospects of victory were closer when England slipped to 15-2, one day on from their abject 67 all out.

Root had made nought in his previous two innings but he led by example with a steely knock while Denly was forced to weather an early barrage before contributing his second Test half-century.

Denly arrived at the crease with an average of only 22 but when asked whether he felt he was playing for his international future, he responded: “I wasn’t thinking about it like that.

“As top-order batter you are always under pressure to score runs – I got couple of starts and haven’t been able to capitalise.

“It’s never ideal when you get bowled out for 67, it wasn’t good enough and we had to show a bit of fight and a bit of character in the second innings.”

He said: “The wicket’s flattened out a little bit and day three is probably one of the better days to bat on the wicket. If we show the same discipline we did today with the new ball tomorrow, we’ll definitely reap the rewards.”

Labuschagne, included following Steve Smith’s absence because of concussion, contributed 80 from Australia’s 246 all out but took a blow to the helmet from a Jofra Archer bouncer for the second time in two Tests.

He added: “You obviously don’t like getting hit in the head but it obviously wakes you up. The doc, it’s a bit of a laugh now, he comes out and I’m like ‘doc, I’m alright, I’m good’.

England’s football capital? Is it London, Manchester or Liverpool?

William Porterfield steps down as Ireland Test and ODI captain