The two best teams in England clash in a colossal affair at Anfield this afternoon. Will the result decide where the Premier League title resides come May?

If Jurgen Klopp’s side win, they will open up a nine-point gap over City and will be eight clear of Leicester and Chelsea, who moved up to second and third respectively on Saturday. It would be the psychological victory they missed last term, when City beat them to the title by a single point. It would be theirs to win.

If Pep Guardiola’s champions win, the gap is down to three, from eight just over three weeks ago. It’s the epitome of a six-pointer. As Liverpool know, there is a fragility to top spot, but City’s current defensive vulnerabilities suggest this is a must-not-lose in Guardiola’s quest for three straight titles, a feat only achieved by Manchester United in the Premier League era.

Recent clashes have been eventful and pivotal; the 0-0 draw last October at Anfield saw Riyad Mahrez sky a late penalty, but the early January meeting at the Etihad was a Premier League epic.

City won 2-1, but that told barely half the story. An 11mm John Stones clearance – we’ll be lucky to see a more bizarre passage of play on Sunday – and a controversial yellow card for Vincent Kompany after a lunge on Mohamed Salah mean Liverpool have unfinished business. The result was even bigger than it seemed at the time.

City lost one and won 16 of their next 17 to lift the title. Liverpool drew four of their next eight, but have been unbeaten since.

Straddling this season and last, that 28-game unbeaten run nearly ended on Saturday at Aston Villa, but Liverpool’s late, late show is becoming a big-screen classic. In the last six weeks against Sheffield United, Leicester, Manchester United, Tottenham and Villa, Liverpool have scored a league-high six goals after the 70th minute, yielding 10 points. Late drama won’t be a surprise to the Anfield crowd this afternoon.

City did similar against Southampton, where more than one ear would have been on the events at Villa Park. No advantage was made, making this afternoon even bigger. 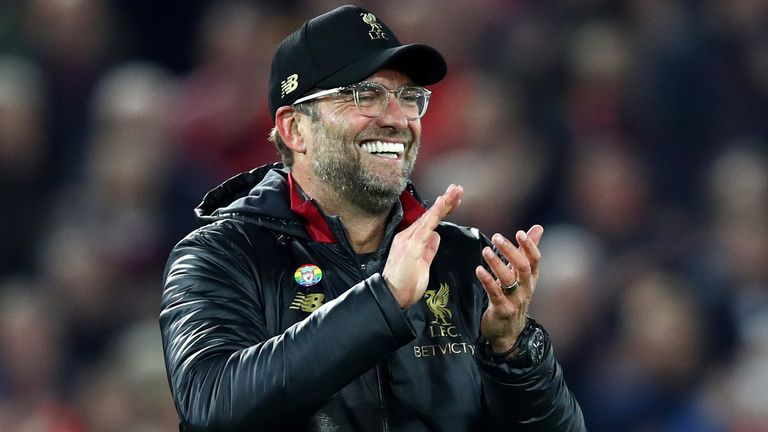 “They’re exceptional, the stadium, the history speaks for itself, the quality of the team and what they do, the quality, I believe more in that. Right now it’s one of the toughest ones, the toughest in Europe,” he said in his pre-match press conference.

FREE TO WATCH: Highlights from Manchester City’s win over Southampton in the Premier League

Mind games? We’d be naive to think otherwise, given these two managers’ meticulous approach to every second of their day.

Come 4pm at Anfield, with Klopp’s habit of staring down the opposition during the pre-match warm-up, those games won’t have stopped. The team selections are key, particularly for a City side without David Silva and concerns in defence compounded by the absence of Ederson. And will it be Jesus or Sergio Aguero? That headache every manager would like.

What could go wrong for Liverpool? De Bruyne: Why I love playing at Anfield

For Pep, a man so awash with nerves he does not eat before a game, it’s food for thought.

So, is this the title decider? No. But there is little doubt come May, this fixture will be seen as the epicentre of Liverpool’s title win or City’s fightback.

On Sunday we may well see the two very best sides in Europe go head to head.

Since the start of last season they have been the clear top two in the Premier League – but their stats show they are leading the way in Europe too.

All eyes will be on Raheem Sterling on Sunday when Manchester City travel to Anfield in search of a victory to close the gap on their title rivals – and they will need the former Liverpool man on top form to do just that.

But Sterling has become used to making the difference in the big games now. The one-time Liverpool teen sensation is now a fully-fledged game-changer for City – and his stats prove he is now among the very best in the world.

Here, in an in-depth feature and with the help of Brendan Rodgers and Jamie Carragher, we tell the story of Sterling’s rise to the very top.

How to watch with Sky Sports

You can watch the game live on Sky Sports Premier League and Main Event, with our TV build-up kicking-off at 1pm before Wolves vs Aston Villa (Kick-off 2pm). David Jones will be joined at Anfield in the studio by Vincent Kompany, Roy Keane, Jose Mourinho and Graeme Souness, as well as Gary Neville and Jamie Carragher pitchside and in commentary, with kick-off at 4.30pm.

There is a whole range of options to complement and enhance your viewing experience with Sky Sports – for both subscribers and non-subscribers.

Find out more about Sky SportsStream live for a one-off payment of just £9.99

For non-subscribers, Liverpool vs Manchester City is accessible through a NOW TV pass for £9.99. Grab a NOW TV Sky Sports Month Pass for just £20 p/m for 2 months (usually £33.99 p/m).

Sky Premier League subscribers will also be able to tune in to watch the channel’s coverage on Sky Go.

You can also follow our live match blog across our digital platforms, where you will be able to watch all the major incidents via our expanded mobile clips service and keep up to date with all the action, including commentary, analysis and team line-ups.

Also, this season, you can watch Premier League highlights with Sky Sports just after the full-time whistle for free and without being a Sky Sports subscriber.

Premier League hits and misses: Arsenal fit for purpose but problems for Tottenham

Sheffield United were like Barcelona at times, says Graeme Souness

Can the Indianapolis Colts surprise the undefeated Chiefs in Kansas City?