Everton are showing a lack of balance and are not making progress under Marco Silva, according to Charlie Nicholas. 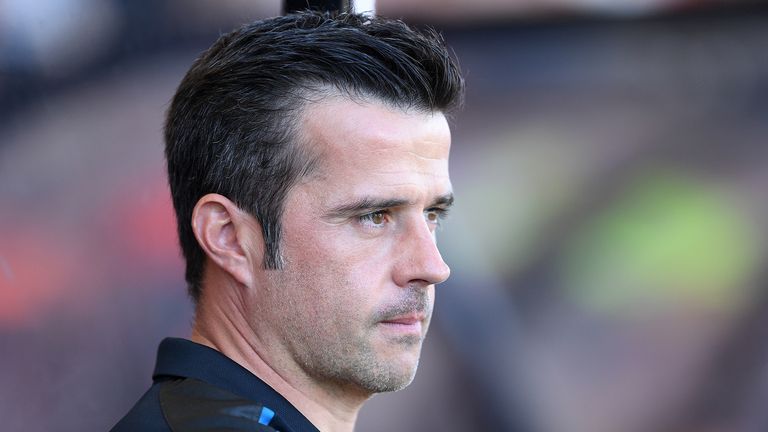 Jonathan Northcroft says Everton have no identity at the moment and insists Marco Silva will not have a job if they carry on like this.

“This team is no further forward. They miss Idrissa Gueye, that’s obvious. At the back I honestly don’t know what Yerry Mina has added.”

Jordan Pickford appealed for a foul in the build-up to Sheffield United’s opener, as Mina inadvertently deflected the ball into his own net, but Nicholas had little sympathy for the England goalkeeper.

“Pickford is all over the place, every time I see him he wants to fight people,” he added. “He was totally at fault for the first goal. A simple corner comes in, he tries to come across the big defender and it ends up hitting Mina and going in.

“They might think it’s bad luck, but it wasn’t. It was bad defending. The second one sums it up. That’s why I really do feel that this manager is under serious scrutiny.

“I’ve been speaking to David Moyes and a couple of Everton fans and they were saying they always feel they’re two or three bad results away from this manager being strangled out of this club.

“But he has to be very careful now. What he’s got coming up is dangerous. Everton are away to Sheffield Wednesday in the cup midweek, then Manchester City at home, then Burnley away,

“This is a tough time for Silva to get through this period. The crowd left with about 10 minutes to go, they emptied the place.

FREE TO WATCH: Highlights from Sheffield United’s 2-0 win at Everton in the Premier League.

“I honestly don’t know what they’re trying to achieve. I’ve said that since day one. You have to identify what you’re buying. It still looks like the set up when Wayne Rooney was there.

“Everything doesn’t seem to fit in right. The balance is wrong.”

Silva’s side were unbeaten at home since February, but having failed to press home a first-half advantage, the Portuguese’s second-half strategy bordered on the chaotic in a hastily thrown-together formation in a bid to salvage something after last week’s 3-1 loss at Bournemouth.

Silva: We were nervous and lacked personality

Dominance of the ball resulted in few clear-cut chances and for seasoned supporters at Goodison Park, what came in the 40th minute was all too familiar.

Pickford came to claim Oliver Norwood’s inswinging corner, United’s first of the match, and although there was shoulder-to-shoulder contact with Callum Robinson, there was not enough contact to warrant a foul.

“Their first goal came from our two centre backs going for the same ball and conceding the corner,” Silva said afterwards.

“It was a bad result and in the second half it was a bad performance. Today again the mistakes we made had a real impact on the result.

“They were winning without a single shot when they made it 2-0. At that moment, we were in the game and commanding it.”

Chasing the game with 20 minutes remaining, Silva took a gamble, taking off right-back Seamus Coleman with substitute Theo Walcott given instructions to hug the right touchline from an advanced position.

However, Everton’s haphazard 3-1-3-3 set-up only seemed to produce confusion and not penetration with the visitors’ tried-and-tested organisation allowing them to profit.

John Lundstram rolled a pass down the side and with Lucas Digne not tracking substitute Mousset and Pickford reluctant to come for the ball, the forward rolled a shot into an empty net.

“I didn’t like the second half at all, and when you make mistakes at this level it’s difficult to turn the result,” he added. “We were too nervous and didn’t make the right decisions.

“We tried everything from the bench and had the solutions there for that, we tried first with the strikers and then to be more offensive down the right, but our decisions were not the best so we have to keep working hard. We need to show more personality on the pitch.

“We’ve had a chat inside the dressing room and we’re all frustrated. We understand the reaction of the fans as they come here to support, but we didn’t play well enough for them to be happy with us.”

Wilder: ‘It was our poorest performance of the season’

Tuesday’s Carabao Cup third-round tie against Sheffield Wednesday now takes on greater significance for Silva, but for Sheffield United, they remain unbeaten away from home since mid-January and this performance demonstrated why that was the case.

Organised, disciplined, decisive and committed to a game plan – almost everything their hosts were not having gone behind vastly against the run of play.

Sheffield United’s Chris Wilder says their win over Everton was their poorest performance so far and admitted they rode their luck.

The Blades have gone to both Bournemouth and Chelsea and taken a point, but manager Chris Wilder believes their latest fruitful away outing was their least impressive performance of the campaign. “Everton have got a fantastic home record and we’ve nicked a win. It’s possibly our poorest performance of the season so far.”

But Charlie Nicholas added: “There was no fluke about it. This is a team with total commitment, nice organisation and shape. We all know they like their wing-backs high up to press. But when they don’t have the ball, there’s a lot of energy in this team.

“John Fleck always looked like he wanted the ball, he’s fitting into the system and is a team player. They didn’t pepper the Everton goal, but set pieces are important and they’re a real unit. I was really impressed with them.”