It was all change at the All England Club as Wimbledon saw new champions crowned in the wheelchair tennis draw.

Dylan Alcott became the first ever quad singles champion after the division made its competitive debut at this year’s championships and it was third time lucky for Aniek Van Koot and Gustavo Fernandez who became the 2019 open division singles champions in the women’s and men’s draws respectively, two previous outings in a singles final for the pair having ended with runners-up honours.

Alcott and Van Koot also had more reason to celebrate as they were also crowned Wimbledon doubles champions – Alcott partnering Britain’s Andy Lapthorne to take the honours in the quad division and the Netherlands Van Koot teaming up with compatriot Diede de Groot.

And in the men’s division Sweden’s Stefan Olsson and Belgium’s Joachim Gerard became the first partnership to beat Britain’s Gordon Reid and Alfie Hewett on Wimbledon grass, taking the honours in the men’s open division doubles. 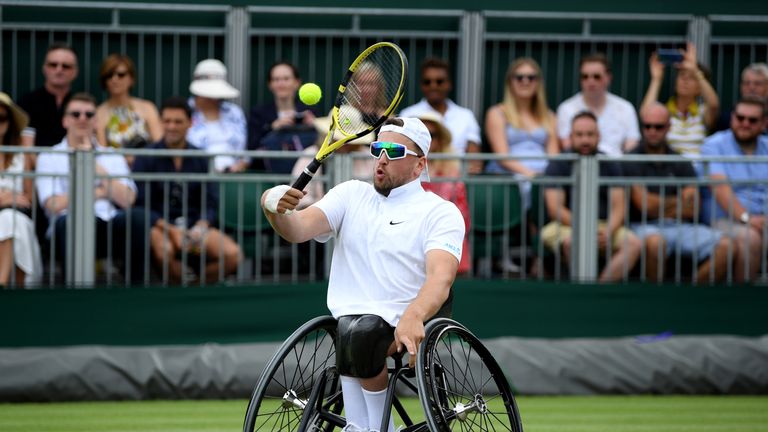 “I don’t think I would be playing as well if we didn’t get into Roland Garros or Wimbledon,”

Alcott on his form

Australia’s Alcott made history in more ways than one when he became Wimbledon quad singles champion.

Not only did he become the first-ever player in the division to lift a title on the hallowed lawns of SW19, the current US Open, Australian Open and Roland Garros singles champion also became the first player in the quad division to hold all four Grand Slam singles titles at the same time.

“It’s unbelievable,” Alcott told Sky Sports. “There’s a big heritage of great grass court tennis in Australia and to show that wheelchair tennis players can play grass court tennis too was a big goal of mine and I was impressed with the quality, like that doubles final we played was good.

“I mean I love the Australian Open, it’s five minutes from my house but Wimbledon, this is the holy grail of tennis, isn’t it?”

Having won all the slam singles titles on offer so far in 2019, heading into the second part of the season the World No 1 is close to adding another historic achievement to his growing list.

If he successfully defends his 2018 US Open singles title in September he will become the first quad player to achieve the calendar Grand Slam, a feat only possible because the division now features in every slam.

“I don’t think I would be playing as well if we didn’t get into Roland Garros or Wimbledon,” Alcott admitted. “When we found out that we were in there I went ‘Oh I’m back’.

“I have a radio show, TV show, I have my foundation and my consulting company Get Skills access and have a life as well. It wasn’t that tennis was going down that list, it was still top when we found out we were going to be at all Slams, but it stayed top proper after that.

“I’ve been working hard, I’m back playing Rio 2016 tennis and I’m going to be working my butt off to win the US Open, I hope everyone else is too then we can put on another show,” he added.

We were in more familiar territory with the women’s singles final as it was a replay of last year’s showpiece between two Dutch dynamos, Van Koot and defending champion De Groot.

After years of impressing on the surface – her backhand slice being a particular weapon, Van Koot finally crossed the line to claim her first Wimbledon singles title.

“I never thought at the start of this week that it was going to end like this, obviously you hope and you train hard for it, but to actually win it’s amazing,” she told Sky Sports.

And with the win, the World No 3 also had a legend of the women’s game congratulating her, although having lost her Twitter password she didn’t find out she had until the press conference after her doubles win with De Groot.

Like Van Koot in the women’s draw, Fernandez was aiming to cross the line and finally lift the Wimbledon singles trophy in his third final.

Having featured in the previous two men’s finals, both battles to the finish with Stefan Olsson, which saw Fernandez end The Championships as runner-up, he was determined this year would be different and against Shingo Kunieda it was.

After dropping the first set the Argentinian ace produced a stunning comeback and let out his familiar match-winning call of ‘Vamos’ with every bit of energy he had left.

“I think I wasn’t strong enough with the idea in the first set,” he admitted. “I was playing well but tactically I wasn’t doing enough.

Pep Guardiola says Mikel Arteta will be a manager in future