Callum Hudson-Odoi did not touch the ball in the build-up to Chelsea’s third goal against Southampton. The statistics will show no involvement of any kind on his part. But the chance, converted by N’Golo Kante with the help of a deflection, would not have arisen without him.

First, there was the decoy run to drag Southampton right-back Jan Valery out of position and leave the overlapping Marcos Alonso in space to pick up Jorginho’s pass. Then, having accelerated forward to rejoin the attack, there was the dummy which allowed the Spaniard’s cut-back to roll through his legs to Kante, who was better positioned to take advantage. 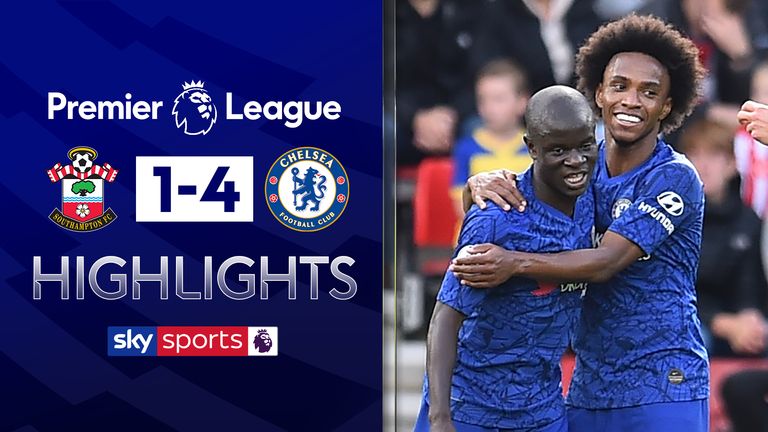 FREE TO WATCH: Highlights from Chelsea’s win over Southampton

Chelsea’s opening goal, for which he did register an assist, was another example. There seemed to be little on when he collected the ball inside his own half following a Southampton attack, but some 40 yards further forward, he spotted Tammy Abraham running beyond his man and picked him out with a raking pass which landed directly at his feet.

It was the kind of pass Cesc Fabregas was producing in this Chelsea midfield not so long ago and it took Hudson-Odoi to three assists and one goal in just 220 minutes on the pitch this season.

The numbers become even more impressive when you consider he only recently returned from a serious injury. They might be higher, too, had he not spurned a one-on-one opportunity of his own in the second half.

Hudson-Odoi’s performances have vindicated Frank Lampard for throwing him straight back into the Chelsea team. They also show why he is now considered to be such an important part of the club’s future.

It is less than a year ago that, frustrated by a lack of opportunity under Maurizio Sarri and amid interest from Bayern Munich, Hudson-Odoi handed in a transfer request. Now, he is tied to a new long-term contract and keeping the £58m Christian Pulisic out of the team.

Hudson-Odoi’s repertoire is widening by the week and there were plenty of examples of the things he does best against Southampton too.

Lampard was critical of his reluctance to run in behind during Chelsea’s demolition of Grimsby Town in the Carabao Cup last month, but it was clear that he has heeded those comments from as early as the 11th minute at St Mary’s, when he latched onto a Cesar Azpilicueta through-ball and teed up Abraham for Chelsea’s first chance of the afternoon.

“That’s where I want him,” said Lampard in his press conference afterwards. The Chelsea manager praised his work-rate out of possession, adding: “Staying tight to the midfield and then releasing themselves against the full-backs, it’s all the things I want from the wingers.”

Lampard has said he does not consider age when he picks his teams, but it certainly helps that his young players possess maturity beyond their years. Hudson-Odoi is a maverick talent capable of game-changing moments of brilliance, but he also makes the right decisions. He knows he can beat his man, but his risks are calculated and he rarely over-plays.

In fact, on Sunday, he usually opted to keep things simple in possession, checking back and laying the ball off to a team-mate to help Chelsea retain possession during awkward periods of the game. Indeed, despite operating primarily in the final third, it was notable that Hudson-Odoi registered the second-highest pass success rate of Chelsea’s starters.

It’s little wonder Lampard is so pleased by his impact this season – or that the travelling Chelsea fans at St Mary’s were so vocal in sounding their appreciation. When he was substituted in the closing stages, the reception that followed him off the pitch was perhaps the loudest of the afternoon.

Where does his form leave Pulisic?

For Pulisic, the man who replaced him, this was a first Premier League appearance of any kind since the 2-2 draw with Sheffield United at the end of August.

The American arrived at Stamford Bridge to much anticipation during the summer, the £58m price-tag suggesting he would be the man to step into Eden Hazard’s shoes, but until Sunday he had not made it off the bench in four consecutive Premier League games. He was not even named in the squad for Wednesday’s Champions League meeting with Lille.

Pulisic aired his frustrations in an interview last week, while Lampard, for his part, has implied that the 21-year-old is not working hard enough in training to merit selection. But a player who trudged down the tunnel without smiling after last weekend’s 2-0 win over Brighton at Stamford Bridge cut a far happier figure after the final whistle at St Mary’s.

Tommy Fleetwood takes positives after missing out on Race to Dubai

Dallas Cowboys look set to move on from Jason Garrett

F1 2019 team-mate head-to-heads: What are the latest scores?